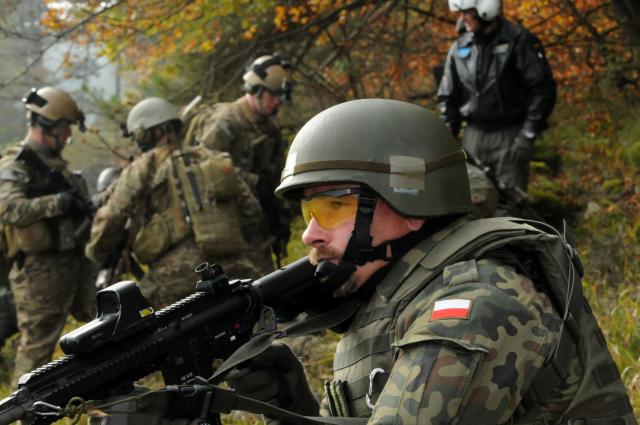 Poland has a long history of conflict. Since the 13th Century, the territory that now encompasses Poland has been stage to countless engagements between armies. From minor Tartar raids in the 17th Century to the German Blitzkrieg in the 20th Century, the landscape of Poland has been soaked with the blood of soldiers from many armies. Now, with storm clouds building in the east, Poles are facing the possibility that another war is coming and that Poland will once again be forced to fight for her survival.

If there is one guarantee in the realm of military planning it is the inability to accurately foresee the shape and direction that a potential future conflict will take. From the moment that forces cross the line of departure and the shooting begins, all of the intricate plans, timetables, and schedules that form a respective side’s war plan become obsolete. War is an event that takes place on a stage of fluctuation. The flow of a conflict never plays out precisely as one predicts it will. The most effective war plans are the ones with enough flexibility to allow a commander to effectively adapt to an ever changing situation.  History provides countless examples of armies that were defeated in large part because they were attached to rigid, inflexible pre-war plans and doctrine.

With this in mind, constructing a picture of what a future NATO-Russia conflict in Poland might look like is no small endeavor. Most of the wars fought thus far in the early 21st Century have been low intensity conflicts far removed from the traditionally conventional conflicts that more or less marked the 20th. Aside from the initial US invasion of Iraq there has not been a true conventional military campaign with frontlines, well defined objectives and political goals. Post-invasion Iraq, Afghanistan, Libya, and Syria, for examples, were or still are insurgency/counter-insurgency types of war where a conventional army has to adapt to fight an irregular, but very capable non-conventional foe. Then there is Hybrid War which has been used by Russia in the Ukraine and to a lesser degree by ISIS in Syria and Iraq.

Hybrid Warfare (HW) is a concept that is much talked about in recent months. On the surface it appears to be a flexible, low-cost method to wage war and achieve a stated political goal for a nation-state or non-sovereign player. A more precise definition of HW is the mixture of conventional military, irregular, criminal, economic, and disinformation efforts brought together to achieve a political objective. There are a number of other definitions for HW in circulation too. Unfortunately, most of them are put forward by journalists who have a limited knowledge of all things military. In their eyes, HW appears to be a revolutionary combination of conventional and unconventional warfighting measures. The war in eastern Ukraine has popularized the idea and led many in the media to label it as a revolution in military strategy. This is not the case.

Russia has yet to achieve success through the use of HW in the Ukraine. The arming and supplying of pro-Russian separatists, a massive propaganda blitz, and even the obscure addition of a limited number of Russian troops has not brought a decisive victory. The war in eastern Ukraine is mired in stalemate. The Donetsk and Luhansk Peoples Republic are still unrecognized states and Kiev has not backed down or sought negotiations. As a stand-alone doctrine, Hybrid War has failed.

So, can Russia use the same strategy in Poland and succeed without attaching it to a conventional military campaign? The chances are slim. Poland does not have a large number of ethnic Russians as the Ukraine does. There is no core group for Russia to use to incite internal strife as in eastern Ukraine. Even in the north, around the periphery of Kaliningrad, the number of ethnic Russians on the Polish side is relatively small. Any attempt to bring about an insurrection will have to come from the outside and the chances of success are low. Russia could implement other elements of HW like cyber attacks, terrorist tactics and propaganda against Poland, but again, the chances of them succeeding without conventional military forces in support are slim. Poland is not the Ukraine. The ethnic divides that threatened to tear Ukraine into pieces does not exist in Poland. Russia is a threat in the eyes of most Poles and the government in Warsaw recognize the dangers posed by Moscow and their responses have been very proactive. Last but not least, Poland is a member of NATO. In the event of Russian meddling, Poland’s allies will come to her aid in one form or another.

Soviet Army literature throughout the later years of the Cold War called for sabotage, political assassinations, deep strikes and acts of terror as the lead up to a Soviet invasion of West Germany. In the event of a Russian invasion of Poland, expect the same tactics to be implemented in the days and hours leading up to an invasion. However, these tactics and others in similarity will not bring about a Polish defeat and capitulation on their own. For that to happen, the Russian Army is going to have to cross the border in force.

The next installment in the Defending Poland series will be published on Monday, 26 June, 2015. In this article we will take a look at what a conventional attack against Poland could look like.