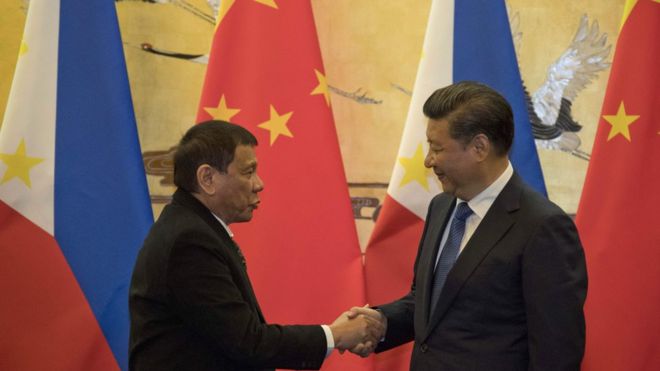 If the US-Philippines relationship were a marriage, this would be the day when the Philippines officially filed the divorce papers. Philippine President Rodrigo Duterte has taken a step that few observers believed would come. In the middle of an official state visit to China,  Duterte announced that he is ‘separating’ from the United States and embracing China as the Philippines newest and most powerful friend in the world. “Your honors, in this venue, I announce my separation from the United States … both in military, but also economics,’’ Duterte stated during a forum held in the Great Hall of the People. “I will be dependent on you.”

During Duterte’s visit agreements were signed for $13 billion in trade deals between China and the Philippines. Whether or not this pivot is genuine and sincere or an episode of bombastic grandstanding by Duterte remains to be seen. Washington will most likely adopt a wait-and-see attitude and declare that ‘all is well’ as the aftermath of today’s announcement plays out.

If Duterte’s words were genuine and his country is about to reject the United States and embrace China then Beijing has won a major diplomatic victory in the South China Sea and placed the United States in an unenviable position. Washington has little leverage and few options available as it comes to terms with what took place in Beijing. At the very least it severely undermines the Obama administration’s Pivot to Asia which has faltered more than once already. On the other end of the spectrum, if Duterte’s announcement becomes reality the US-Philippine alliance might be over permanently.

We will discuss this topic more on Monday or Tuesday.