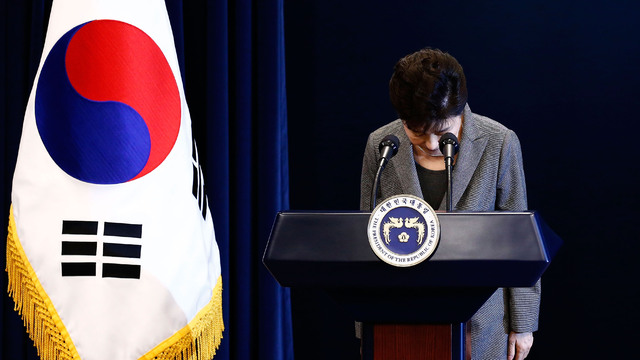 The global political order took another major hit on Friday with the impeachment of South Korean (Republic of Korea, ROK) President Park Geun-hye. The National Assembly passed the decision to impeach by a wide margin, 234-56. Park has been a major player for months in the nation’s largest political crisis ever. Yet while thousands of citizens demonstrated and called for her to resign Park held firm. Opposition parties were reluctant to call for impeachment because of the possibility, surprisingly not unprecedented, that Park could be exonerated by the process. The tipping point apparently came when prosecutors accused Park of being an active player in the corrupt dealings of her longtime friend and close associate Choi Soon-sil.

The next step in the process is for the Constitutional Court to rule on the validity of the motion to impeach. That could come in as little as three weeks. If the impeachment vote is upheld, a new presidential election will take place two months from then. Park will be unable to run, of course. However, if the impeachment is not upheld, she will be reinstated and serve out the remainder of her term in office. Park was removed from power immediately following the vote on Friday. During the Constitutional Court’s deliberations, the ROK’s acting head of state will be Prime Minister Hwang Kyo-ahn. Hwang’s role will be that of a caretaker essentially. He is unlikely to make any major policy decisions or changes. Barring a major international crisis his duties should be rather bland.

On a larger stage, the impeachment brings up many questions. Out of those available, let’s touch on a handful that are compelling…

Will this crisis embolden North Korea in some way? We touched on this question back in November. So far, Pyongyang has been content just to gloat at the political chaos in the ROK. Given Kim Jong Un’s instability, that could change in the blink of an eye. Even minor saber-rattling by the North might have the potential to escalate into something considerably more dangerous.

How will the impeachment vote complicate relations between the ROK and United States? Preident-elect Trump scrutinized the defense relationship during the presidential campaign. How this translates after 20 January 2017 remains to be seen. There are so many moving parts in the relationship that nothing firm will be decided on until a new president is elected in the ROK.

Who will ascend to the presidency next in the ROK? South Koreans are learning that when masses of citizens who are generally powerless come together, they can wield substantial power. The rest of the world is learning this as well, but the concept is strikingly foreign to the average South Korean. Will the next president be a populist, following in the wake of the anti-establishment fervor that has swept across the globe? What will the next president’s policies mean for the economy? Relations with the US? Relations with the North? At the moment the safe bet is that the next president will come from the political left, however, anything is possible at this point.

Until the Constitutional Court makes its ruling, all South Korea and the world can do is watch and wait.