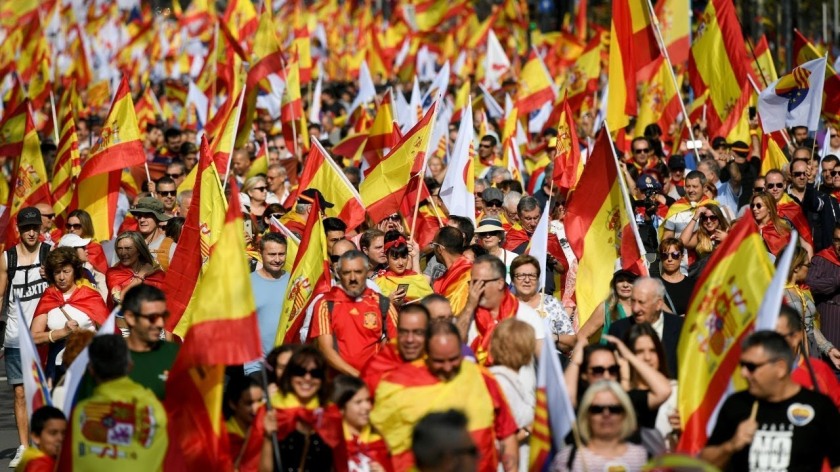 There’s something to be said for the determination of former Catalan President Carles Puigdemont. Even after he was officially removed from office on Saturday he remained outspoken regarding his commitment to lead Catalonia to independence in the future. On Saturday afternoon after the Spanish government suspended Catalan autonomy, dissolved its government and assumed control of government functions in the region, Puigdemont released a prerecorded address to Catalans. In it he called Madrid’s actions ‘predetermined aggression’ and promised to continue the fight for independence through ‘democratic opposition.’  Regardless of his promises and desires Puigdemont is, for all intents and purposes, a man without a country.

Madrid is imposing direct rule on Catalonia, as Spanish Prime Minister Mariano Rajoy promised would happen if events continued along the independence path.  The declaration of independence passed by the Catalan parliament on Friday is now officially inconsequential. Whatever power base separatist politicians believe they had following the referendum appears to be dissolving, if it ever truly existed in reality at all. Polls published by the Spanish newspaper El Pais this weekend show more Catalans in favor of dissolving the regional parliament and holding new elections.  Fifty-five percent of Catalans who responded to the poll opposed the declaration of independence, with forty-one percent in favor. Those numbers are not encouraging signs for deposed Catalan MPs and other pro-independence and separatist politicians who want to continue the fight.

Whether the separatists refuse to acknowledge it or not, the writing is on the wall. The bid for independence was doomed from the beginning. Even if the pro-independence politicians had removed the blinders and recognized that the level of support they believed they had was in fact a mirage, there is no conceivable way the Spanish government would’ve ever allowed one of its most valuable regions to break away from the mother country. Had the shoe been on the other foot and Catalonia had somehow won independence from Spain, Puigdemont and his newly formed government would have found their new state to be a pariah on the international scene. Spain’s allies in Europe, along with the European Union, and the United States strongly opposed Catalan’s independence experiment. Although the EU, and a handful of European states offered their help in negotiations between Catalonia and Madrid should it come to that, all foreign states and bodies have recognized publicly that the Catalan Crisis is an internal matter.

The crisis has not passed just yet. There are still hurdles for Madrid to overcome, and it has to determine if and when full autonomy will be returned to Catalonia. The coming weeks and months will be a time to mend wounds and forge a stronger relationship between Madrid and the region. Failure to do so on the government’s part will only invite Catalan separatists to resume the fight for independence at some point down the line.