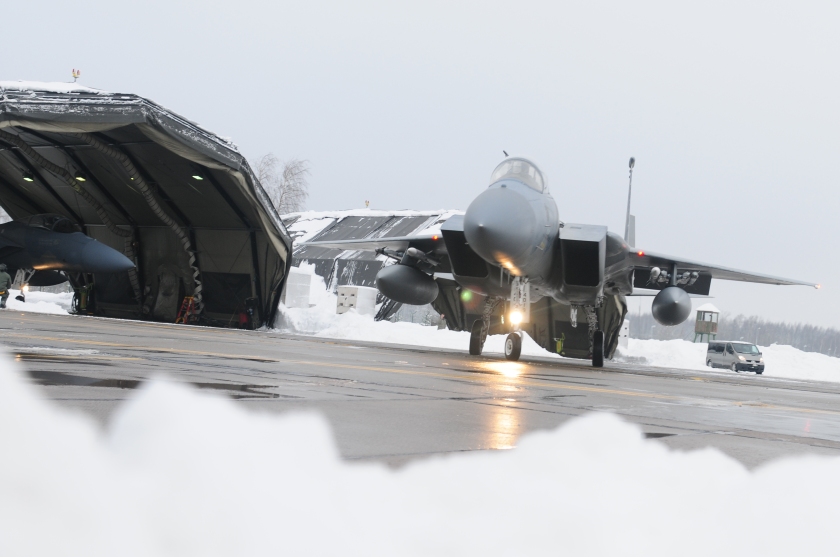 This week will mark the end of NATO’s current Baltic Air Policing rotation which stood began in September, 2017. USAFE F-15C Eagles of the 493d Fighter Squadron spent the rotation operating from Šiauliai air base in Lithuania, and Belgian F-16A MLU Falcons flew from Amari air base in Estonia. Later this week Danish F-16AMs will replace the US fighters, and Italian Air Force Typhoons will assume BAP duties from the Belgians. The September-January time period was a busy time in the air over the Baltics. US fighters were scrambled 30 times to intercept Russian aircraft flying near the airspace of the Baltic nations. Most of the activity took place in September around the time of Zapad ’17. Overall, the numbers are similar to those of recent BAP rotations, but still significantly higher than what they were in the days before Russia’s annexation of Crimea, and involvement in the Ukraine conflict.

The Baltic States are not the only area NATO conducts air policing missions. Iceland is another. The USAF ended the practice of rotating fighter squadrons to Keflavik in 2006. Shortly thereafter, Russian aircraft began to make incursions into Icelandic airspace. As a result, NATO stood up the Icelandic Air Policing mission in 2008 and has been rotating fighter detachments from member nations ever since.

The air policing rotations safeguard the sovereignty of air space for member nations that do not possess their own air arms, as well as provide valuable experience for pilots and ground personnel deployed. In a time of crisis, the numbers of NATO fighters operating from the Baltics and Iceland would increase. Therefore, it is heartening to know that there is a good amount of aircrews and support personnel who are familiar with operating from these locations.

The next Baltic Air Policing rotation will run from this coming week until May, 2018.