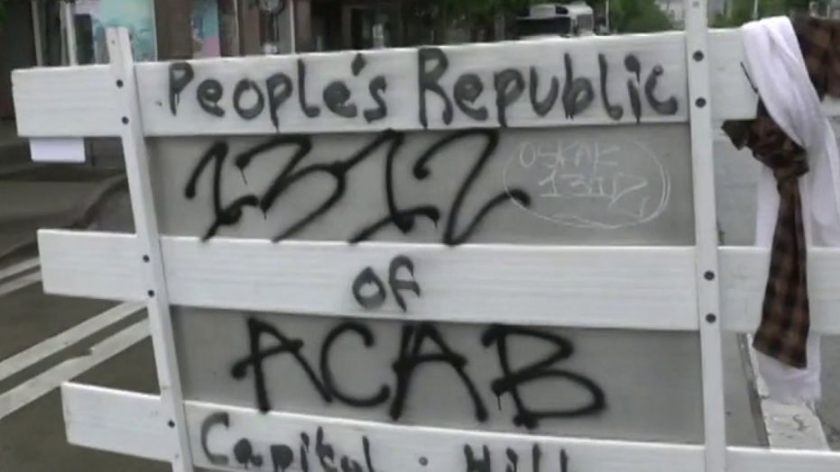 During this past week in Seattle anarchists and alleged protesters took over the Capitol Hill section of the city, a six-block area. Seattle Police were forced to leave the East Precinct in the area, essentially ceding control of the area to the anarchists, and protesters. In the days to come, an autonomous zone of sorts was set up, at first dubbed the CHAZ (Capitol Hill Autonomous Zone) and more recently changed to CHOP (Capitol Hill Occupied Protest). Apparently, the name change was made to lighten the amount of blowback CHOP/CHAZ was receiving.  CHAZ sounded too much like an insurrection and its leftwing supporters do not want to give President Trump an excuse to use military force to retake the area.

Semantics, and public relations notwithstanding, what’s happening in Seattle right now fits the definition of being an insurrection. An outside force has moved into the area, taken control, and evicted all components of the Seattle city government that were present. Roadblocks, and barricades have set up and even though many of the anarchists, ANTIFA members, and protesters now embedded in Capitol Hill deny it, the area is giving off the appearance of being an entity fully independent of the City of Seattle, State of Washington, and the United States of America.

The city and state government have yet to take action against the self-proclaimed Capitol Hill Autonomous Zone. Seattle’s mayor, Jenny Durkan does not believe CHAZ is a threat, or even guilty of breaking the law. Durkan naively believes (and she has said this publicly) that CHAZ will usher in a ‘Summer of Love’ for Seattle. Whatever the hell that means. Her police chief apparently wants to reclaim the area but Durkan won’t have it. Washington State’s governor appears comfortable just staying out of the mess, while President Trump is growing impatient. He’s told Mayor Durkan in no uncertain terms that if she will not retake the Capitol Hill area, he will.

It’s not difficult to understand that the CHAZ/CHOP experiment is setting a dangerous precedent, especially if allowed to move forward unchecked. What’s happened in Seattle is essentially a case of sovereignty squatting. An outside group (Antifa, Marxists, etc) have come in, occupied a section of Seattle, and are being allowed to operate a colony entirely cut off from its parent city with impunity. By not ending this situation, and tossing CHAZ on the trash pile of Horrible Ideas, Seattle is unconditionally surrendering the rights of its citizens, property owners, and businesses to any group that wants to come in and claim a piece of the city as its own sovereign territory.

To say nothing of what means for the United States. This week we are going to discuss that, and explore why it might very well be in the nation’s best interests to liberate the CHAZ through the use of force.

Author’s Note: The first China piece will be coming this week too. Deepest apologies for running so far behind.